Not all Blueberries are made the Same

Who could have thought there was so much to know about blueberries. This was my first introduction to the North American blueberry — very different to the ones I was used to in continental Europe.

I was invited to help pick blueberries at a nearby organic farm in Canada, a short drive from Waterloo. What I found astounding was the fact that although these North American berries had a similar shape and size, the bushes upon which they grew were much larger and upright, some almost 2m tall. Additionally, the Canadian berries grow in clumps, much like grapes, and are a hell of a lot easier to pick.

European blueberry bushes are much shorter, almost at ground level, the berries are slightly darker and stain any surface they touch — like your hands and face; they also grow in groups of one or two berries, meaning that picking them is slow and backbreaking work.

The European berries are technically called a “Bilberry” and is any of several species of low-growing shrubs in the genus Vaccinium (family Ericaceae), bearing edible berries. The species most often referred to is Vaccinium myrtillus. There are several other closely related species. Bilberries are distinct from blueberries but closely related to them.

If you’re buying blueberries in the supermarket, chances are they are of the North American variety — mainly because they travel much better and the berries are more resilient to damage.

The differences aside, the North American cousin is just as delicious to eat; believe me, I stuffed my face silly all day. One handful for the bucket, the other for me. 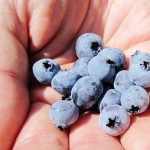 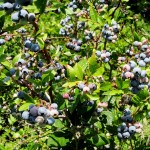 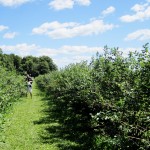 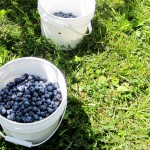 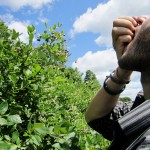 GD Star Rating
a WordPress rating system
Not all Blueberries are made the Same, 9.0 out of 10 based on 1 rating

7 Comments → “Not all Blueberries are made the Same”