A Rope Ladder, a Boy and a Dirty Rag

I shouldn’t have been shocked, I’ve seen it all before. But for reasons unknown that day, I stood still and watched a boy cleaning my hotel-room window. Perched right there in front of me, with a dirty rag in one hand and a spray-bottle in the other, in true-to-life high definition, a boy of no more than seventeen went about his routine.

His forehead glistened with beads of sweat and his eyes squinted against the reflection of the strong midday sun. I realized that the bright light and tinted windows made it impossible for him to see into the room.

I don’t know why I was mesmerized, or shocked, or both? Perhaps it was the fact that he was perched six floors up, or that his bare feet sometimes hung off the parapet, or that the rope ladder which he used to climb from window to window, showed considerable signs of fatigue?

No, there was no safety harness either, but his nimble movements made it all look so easy and rehearsed — this was a trapeze like no other.

Less than a centimeter of glass separated me from his monumental performance, and the proximity of it all started to get under my skin.

How could a well-known hotel chain like the Holiday Inn allow this to happen? Isn’t it ironic that the hotel has permanently bolted shut some windows for its patrons’ safety, but turned a blind eye to young boys cleaning windows in the gusty sea breeze?

Naturally, I took photos as evidence, put on my shoes and went downstairs to track down hotel management in the hope of showing them what was unfolding under their own roof.

Eventually, I found the duty manager in the dining hall, showed him the pictures and insisted that he do something about it. His indifferent reply merely pointed out that they [the boys] are employees of an external contractor and not the hotel’s problem.

Life is cheap here, and I wasn’t expecting them to care about the life of a boy, even less so anyone who isn’t an employee. But I did think they would care about public perception — clients seeing a needlessly dangerous work environment — or the management’s own job security.

I rambled on about the negative press the hotel would receive if there were ever an accident, but I still didn’t feel it was of any importance to them, nor was I getting through. As a last resort, I mentioned that I’m intimately acquainted with senior management of the Intercontinental group of hotels. Ordinarily, I’m not a name dropper, but this seemed to be an appropriate time to play dirty.

Still, the reaction wasn’t immediate, but at least I’d received confirmation that something would be done to ensure safety is improved. Can’t say that I’m completely satisfied with the resolution, but it’s a start.

Do I trust them to follow through on their promise? No, not really. So the next time I’m back, I’ll double-check to make sure the situation has improved. 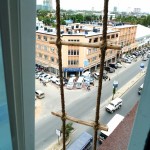 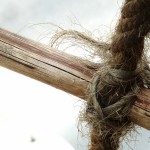 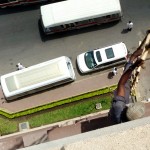 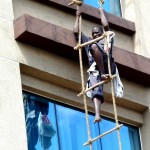 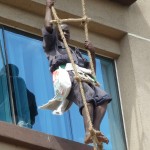 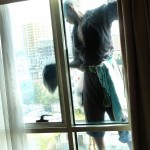 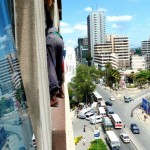 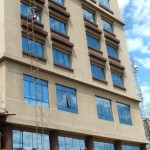 One Comment → “A Rope Ladder, a Boy and a Dirty Rag”